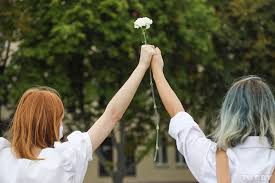 Streets of Minsk, Belarus was taken up by thousands of protesters in what is claimed to be the largest demonstration ever in the history of Belarus, where approximately 200,000 demonstrated against the widely disputed re-election of President Alexander Lukashenko on Sunday, August 9, 2020.

Lukashenko, often referred to as ‘Europe’s last dictator,’ has been running the office since 1994 and further claimed to a ‘sixth-term’ with a landslide victory with 80% of the vote in the election. Opponents immediately claimed the result to be rigged, and citizens took upon streets calling for change.

The unrest is growing ever since with excessive police brutality and arrests of more than 6000 protesters. In such a scenario, women have been at the forefront leading the protests. The movement is called “women in the white” in acknowledgment of the women dressed in white, forming ‘chains of solidarity.’ Protesters have been waving red and white flags as a symbol of opposition since the President replaced it with a more Soviet-looking national flag soon after coming to power.

The outcry erupted as a response to the institutionalized patriarchy persistent in Belarus on a national level. President Lukashenko’s comment on the constitution not made for women and that women do not have strength and possibilities to govern the country, specifically ignited the response. He said earlier this year, “Our society has not matured enough to vote for a woman. This is because, by the constitution, the President handles a lot of power.”

Challenging his position and credibility, Sviatlana Tsikhanouskaya, a 37-year-old former stay-at-home mother, fought him as the main opposition. Her candidacy came into effect after her husband’s arrest, who was blocked from registering the vote. She gave Lukashenkdo the toughest competition with massive rallies and campaigns, leading to a high number of votes. The two other women who pooled their resources for Tsikhanouskaya’s victory, Maria Kolesnikova and Veronika Tsepkalo, were prominent figures in the election.

However, security threats have prompted the two of them, the opponent Sviatlana Tsikhanouskaya and Veronika Tsepkalo leave the country. Maria Kolesnikova is the only one left in the country after two campaign colleagues fled Belarus over security concerns for themselves and their family. The security threats and harassment to women activists in Belarus was a common practice in Belarus used by the authority to silence the opponent’s voice.

Amnesty International, the human rights body, has also released a public statement highlighting the gender-based reprisals against the women activists in Belarus calling out against the high-level misogyny and patriarchal attitudes promoted by national media and security threats to women presidential candidate and their children. Amnesty International has called upon Belarus authorities to adhere by all the international human rights agreements, to take immediate action against all sorts of reprisals to women activists and practice of gender-specific intimidation and threats of gender-based violence, and to effectively investigate and provide justice to threats, violence, and arrests of reported victims.

Kolesnikova, a leading figure in Tsikhanouskaya’s campaign, is the only one left in the country, addressing the protests and seen in the streets with women forming chains. She commits to continuing the protests and raising voice for free and fair elections, releasing the prisoners and supporting the ones who suffered from the protests.

Besides the gender-specific reprisals, the brutal response by the authority has been widely condemned. The EU and the United Nations also condemned the violent response to the protesters.  The videos released on social media showed the ex-special force’s officers throwing their uniforms into bins in disgust at their former colleagues’ actions. The testimonies of citizens showed that the repression through brutal forces targeted not only activists but also journalists and even accidental passer-by.