An overview of Gender gaps in labor market

As 8-year-old Greta learned about climate change reduction through recycling of wastage and plastic alternatives, she was surprised to learn about human’s ability to change the climate conditions of the earth. Sharing in the TED talk in Stockholm in January, she explained how deeply affected she was when she got to learn about deteriorating climate conditions and continuity of human’s choices to further deteriorate it. She could not comprehend that people, despite being aware of the climate crisis, managed to stay indifferent, even worse, carried on with their choices harming the environment. The more documentaries and papers she saw and read, she got petrified with the thought of having no future for her generation and the next ones.

At 11 years old, she fell into depression, stopped talking and eating and later, was diagnosed by Asperger’s syndrome, OCD and selective mutism. Partly the reason was because of her increasingly deep concerns about the climate crisis. At 15 years old, she decided to turn her emotional weaknesses to her biggest strength and started the protest against climate change. It was August in 2018 when she decided to sit outside the Swedish Parliament and start protesting alone.

The protest is consistent till date. Every Friday she rides her bicycle to the Swedish Parliament and raises the placards for climate change reduction. Her banner-skolstrejk för klimatet (school strike for climate)-is now translated into multiple languages. Students and climate activists around the country join her for her cause. She is not alone anymore and being a voice of thousands. “Fridays for future”- the name of students protest is gaining worldwide attention and motivating students and children to take charge of their future. She has arisen to the world as a model of determination, inspiration and positive action.

The climate strike was inspired by students from the Parkland school in Florida, who walked out of classes in protest against the US gun laws leading to the massacre on their campus. Greta was part of a group that wanted to do something similar to raise awareness about climate change, but they couldn’t agree what. But unlike others, she could not wait further. She recalls, “I painted the sign on a piece of wood and, for the flyers, wrote down some facts I thought everyone should know. And then I took my bike to the parliament and just sat there, alone from about 8.30am to 3 pm – the regular school day. And then on the second day, people started joining me. After that, there were people there all the time.” 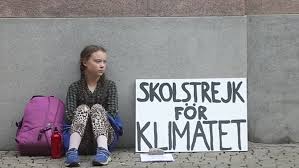 In response to people’s comments on hampering her education, she bluntly stated “We children are not sacrificing our education and our childhood for you to tell us what you consider is politically possible in the society that you have created. We have not taken to the streets for you to take selfies with us, and tell us that you really admire what we do.” This was part of her latest speech condemning the MPs of House of Parliament in the UK.

Her demand is simple-listen to climate scientists. Listen to the facts. “Around the year 2030, 10 years 252 days and 10 hours away from now, we will be in a position where we set off an irreversible chain reaction beyond human control that will most likely lead to the end of our civilization as we know it. That is unless in that time, permanent and unprecedented changes in all aspects of society have taken place, including a reduction of CO2 emissions by at least 50%” She shared in her speech that the data that are backed up by IPCC, whose data are unreservedly supported by every national level scientific body across the world the world.

She demands immediate action and climate crisis be treated as a global emergency. She believes this is the next threat to entire humanity and we are slowly approaching towards 6th mass extinction. Yet, we are silent and not doing anything to stop the emissions. The reason behind why the world is not acting as per the need, and why everyone is talking about ‘lowering’ the emissions but not  ‘stopping’, is because of the current economic and political practices that world runs by  “The climate crisis is both the easiest and the hardest issue we have ever faced. The easiest because we know what we must do. We must stop the emissions of greenhouse gases. The hardest because our current economics are still totally dependent on burning fossil fuels, and thereby destroying ecosystems in order to create everlasting economic growth.” said Greta during her speech to UK Parliamentarians.

Greta has received appreciation, admirations, and hurtful criticisms as well. Many climate change deniers have slammed Greta calling her “ignorant brainwashed child”. But with every criticism and every new day, the determination and voice of the Nobel Prize nominee are rising. She is herself a vegan, has given up flying and has made her parents go vegetarian and quit flying as well. She has been named as one of the world’s most influential teens by TIME magazine.