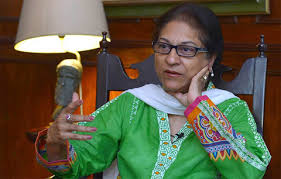 LAHORE, Pakistan (Reuters) – Pakistani human rights campaigner Asma Jahangir, who faced death threats by fighting for unpopular causes and was jailed in the 1980s for her pro-democracy work during military rule, died on Sunday in Lahore. She was 66.

Accolades for the fiery activist, whose name was virtually synonymous with human rights in Pakistan, poured in from political and legal figures.

In Pakistan, she campaigned tirelessly for democracy and free speech, frequently receiving death threats for taking up causes such as criticizing the strict blasphemy laws of the conservative Muslim-majority country.

A lawyer by background, she was a founding member of the Human Rights Commission of Pakistan and former president of the Supreme Court Bar Association.

Fearless in the face of authority, she was imprisoned in 1983 for her work with the Movement to Restore Democracy during of General Zia ul-Haq’s military rule.

She was also placed under house arrest in 2007 for her part in a lawyers’ protest movement that helped lead to military leader Pervez Musharraf stepping down from power.

In recent years, she was outspoken over the misuse of blasphemy laws that carry a mandatory death sentence for insulting Islam’s prophet.

She also represented several civil society organizations that were threatened with shutdown as well as families of several “disappeared” activists over the past few years.