Beijing+25: Progress and challenges till date

Of many inspirational women from history, Rosa Parks is a renowned name in civil rights movements building. The African-American activist stood against racial segregation by sitting down. Sounds ironic, but that is the story of Rosa Louise McCauley Parks who was ‘tired of giving in” and refused to give her seat to a white male passenger while travelling in a bus. The moment was the first to be recorded in history as a start of civil rights movements.

Born in 1913 and raised in Montegomery, Rosa Parks lived through many moments witnessing racial discrimination from a very narrowed lens. From the moment she saw school buses carrying white children while black children had to walk, she had understood the discrimination existing as a custom. Growing up fighting physically against white bullies, she led her career fighting by being a part of many activism and movements.

After getting married to Raymond Parks, then member of National Association of the Advancement of Colored People (NAACP), she was able to directly and indirectly be part of many activism for the rights of colored people. With her husband’s motivation, she graduated from high school in 1993 when there were only 7% of African-American women with a high school diploma. In 1943, she held the position of secretary in NAACP under the leadership of Edgar Nixon as it was considered a woman’s job. However, she was able to fight for various civil rights cases under her capacity as a secretary. She also joined various other organizations and also attended the Highlander Folk School, an education center for activism in workers’ rights and racial equality in Monteagle, Tennessee. 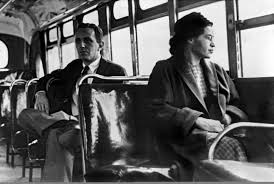 However, the significant event that rose her to popularity as a figure of inspiration to black community was the resistance to give up her seat on a bus in Montgomery. As per Montgomery city ordinance in 1990, passengers were segregated by race in transportation seats. The law didn’t require passengers to give up their seat to other race, however, over time and custom, it had become a practice that “colored people” had to give up their seats to white people. The drivers had the right to segregate passengers on the basis of the law. The first four rows of seats on each Montgomery bus were reserved for whites. Buses had “colored” sections for black people generally in the rear of the bus, although blacks composed more than 75% of the ridership. The sections were not fixed but were determined by the placement of a movable sign. Black people could sit in the middle rows until the white section filled; if more whites needed seats, blacks were to move to seats in the rear, stand, or, if there was no room, leave the bus. Black people could not sit across the aisle in the same row as white people. The driver could move the “colored” section sign, or remove it altogether. If white people were already sitting in the front, black people had to board at the front to pay the fare, then disembark and re-enter through the rear door.

On December 1, 1955, as it happened so that when Rosa Parks was on a bus, the white sectioned filled up and she was asked to give up her seat. The driver riding the bus was James B. Flake, who had dropped her years ago in rain because she entered his bus from the front door opposing the practice of colored people entering from black. It was the same driver who asked Parks to give her seat over to a white passenger when she refused. She continued sitting while the driver warned her for getting arrested. She got arrested on the charge of a violation of Chapter 6, Section 11 segregation laws of the Montgomery City code. 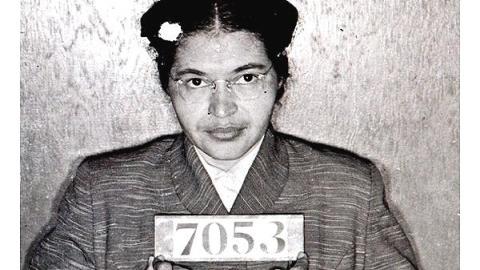 That single act of resistance sparked the civil rights movement in the name of Montgomery bus boycott. On the day of her trial, the colored community held the bus boycott movement and did not chose the buses as their means of transportation. Rather they took black-operated cars, carpooled and even walked up to 20 miles. The success of one-day boycott led to form an organization called Montgomery Improvement Association (MIA) later to lead the boycott movement. The organization was led by Martin Luther King Jr, fresh figure in civil rights movements who later won the Nobel Prize. The boycott then went on for 381 days and resulted in city repelling the law for being unconstitutional.

Although there were predecessors to Rosa Parks in refusing to give up the seat, NAACP considers this case as the pioneer given her virtuous position and role she played in society. She is internationally viewed as a symbol of resistance to racial segregation. Post-arrest Parks raised to become an icon of civil rights movements, however had to face various struggles for retaining her jobs. In 1992, Parks published Rosa Parks: My Story, an autobiography aimed at younger readers, which recounts her life leading to her decision to keep her seat on the bus. A few years later, she published Quiet Strength (1995), her memoir, which focuses on her faith. Passed away at 92 due to dementia, Rosa Parks never had any children and had a challenging life but consistently promoted the civil rights movements. She received many national recognitions throughout her life including NAACP’s 1979 Spingarn Medal, the Presidential Medal of Freedom, the Congressional Gold Medal, and a posthumous statue in the United States Capitol’s National Statuary Hall. She died in honor as the first woman and third of only four Americans to receive this honor. Her funeral was held for 7 days and currently, California and Missouri commemorate Rosa Parks Day on her birthday February 4, while Ohio and Oregon commemorate the occasion on the anniversary of the day she was arrested, December 1.